"The Hotel de Rome Berlin perfectly blends the history behind an iconic classical building into the contemporary style of the new Berlin, in a prime location, close to the Berlin Dom, Museum Island and Brandenburg Gate."

Located on historic Bebelplatz, Hotel De Rome is one of the most prestigious luxury hotels in Berlin. Once the headquarters of the esteemed 19th century Dresden Bank, it’s a place where heritage and stylish modernity meet; a relaxed hideaway in the animated Mitte district. Face-to-face with the State Opera, a stroll from Museum Island, with a rooftop oasis that peacefully observes it all. Inside, a former jewel vault becomes the ethereal De Rome Spa, a cashier’s hall becomes a mosaicked ballroom, and the whole historic building becomes a serene space in the core of an up-all-night city.

Sleek and stylish, Hotel De Rome’s 108 stunning rooms and 37 suites offer an invitation to share in Berlin’s history and be part of the city’s vibrant present. Together with the designer Tommaso Ziffer, Olga Polizzi, Deputy Chairman & Director of Design at Rocco Forte Hotels, created a magnificent and unique interior for the historic building. The architectural features were lovingly restored and in many cases reinterpreted. This is also the case with the historical suites, which are located in the former director of the bank’s offices. Here you can still find original built-in wardrobes, doors, wood panelling and the occasional splendid wooden coffered ceiling. In some of the suites, which also witnessed the Second World War, you may still find shrapnel in the walls and wood panelling.

Continuing with Rocco Forte’s aim to honor the history of the building, the swimming pool was built in the former Bank’s jewel vault, so gold and precious stones color accents were used in the tiling giving it a really luxurious and bright look. It’s a 20 meters long and a total oasis! For those who want to squeeze in a workout, enjoy the gym which is equipped with the latest gym gadgets, free weights and Technogym weight machines, along with a full range of Technogym cardiovascular equipment.

Inside, a former jewel vault becomes the ethereal De Rome Spa, a cashier’s hall becomes a mosaic ballroom, and the whole historic building becomes a serene space in the core of an up-all-night city.

The living room of Hotel De Rome, the Opera Court invites guest to unwind in chic splendour. Settle into the curvaceous seats with a drink, or give in to the sublime temptation of Afternoon Tea in Berlin. Inspired by its sister hotel, the iconic Brown’s Hotel in London, where Queen Victoria is said to have indulged, this truly is Afternoon Tea fit for a queen.

Fine cuisine by Fulvio Pierangelini at the elegant La Banca restaurant beautifully marries the tastes of Italy with the soul and seasonal ingredients of Berlin. Dine outdoors for echoes of the garden abound, from the natural colour palette to the flourishing olive trees, while classically-inspired sculpture and modern works from local Berlin artists harmonise the dining experience.

La Banca Bar is a buzzing after-hours spot with resident DJs and live music, paired with signature drinks created with infusions based on herbs, spices, dried fruits or vegetables, paired with partly common ingredients or completely uncommon ones. It’s a rooftop oasis bordered by softly swaying lavender and bamboo, looking out over historic Bebelplatz, St. Hedwig’s Cathedral, the colonnaded splendor of the Opera House and the panoramic sweep of the Berlin skyline beyond. It’s the place to be for the local crowd in the summer after work, so you can expect to meet some fun people!

Mauricio Buenaventura
Who's it for?

The property is suited for either families and couples thanks to its large spacious suite options.

A relaxed hideaway in the animated Mitte district, face-to-face with the State Opera, a stroll from Museum Island.

Have a swim in the golden pool inside the former jewel vault!

Follow a local tour guide you will learn about street art and graffiti techniques from real street artist and get the chance to create your very own unique and authentic canvas. This is a truly Berlin experience.

Pass a summer evening on the rooftop terrace with a view over the Bebelplatz and Opera House.

Hotel credit of €85 for rooms & Junior Suites per stay

Complimentary high speed WIFI access for the duration of stay 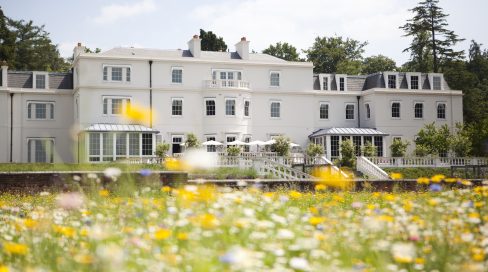